A Staffordshire farm and tourist attraction has raised more than £6,000 for Guide Dogs after choosing the organisation as their charity throughout 2019.

The National Forest Adventure Farm, near Burton on Trent, raised the impressive sum after hosting staff fundraising events, as well as collecting donations from visitors at its annual festival of fear, Screamfest, and at its interactive maize maze attraction, both of which attracted thousands of visitors. 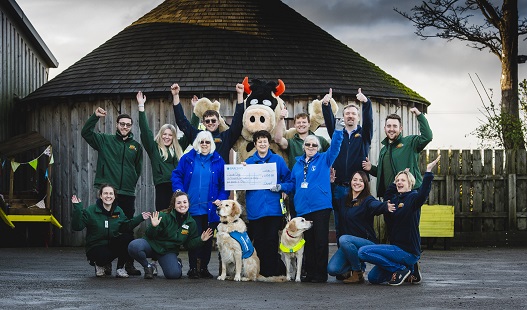 This money will now fund the education and care of a guide dog puppy, which is to be named Crumpet – after the farm’s popular mascot cow.

India Burnton, the farm’s charity champion, said the staff chose Guide Dogs as its official charity last year because the staff are all massive dog lovers. “It’s impossible not to be touched by the amazing work the charity does to help visually impaired people lead more fulfilling lives,” she said.

“We choose a different charity every year and last year we wanted to raise as much as possible for Guide Dogs. We held staff events including a quiz and race night. Adventure Farm visitors and suppliers very kindly supported the charity by attending our dog-walk twilight maize maze event and posting money in collection tins around the site all last year. We are thrilled to have raised £6,434.84. We’re also chuffed to bits that we’re able to name a puppy Crumpet after our mascot.” 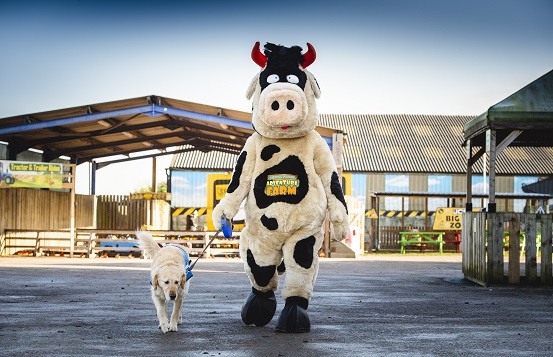 Thanking the National Forest Adventure Farm for its donation, Pat Williams, Guide Dogs Chair Person for Burntwood, Cannock and Lichfield: “Every day in the UK, 250 people start to lose their sight and we are here to help and support them to lead independent lives. We rely heavily on the kind donations such as this generous sum from the staff and visitors at the Farm so that we can continue our work. Every pound makes a tremendous difference to someone living with sight loss.”

The farm is owned by brothers Tom and Ivor Robinson, whose family has been at the 400-acre farm since 1970. They opened the first maze in 2004 and working with the National Forest to plant 28,000 trees.

The National Forest Adventure Farm opened its doors all year in 2011, as the brothers looked to have a sustainable business that looked after the land and offered something different for the area.

To find out about the all year round activities at the farm visit: www.adventurefarm.co.uk

Staff at the National Forest Adventure Farm, with mascot Crumpet, hand over a cheque to Guide Dogs (l-r): Madeline West – Guide Dogs volunteer puppy walker, with CJ the dog; Carol Trigg – guide dog user and official speaker for charity, with Flora the dog; and Pat Williams, Guide Dogs for the Blind representative for the Burntwood, Cannock and Lichfield region.